Greater MN Interpreters, enter the Coupon Code that was provided in your email. Don’t have the Coupon Code? Email us before registering at workshops@aslis.com

ASLIS is an Approved RID CMP Sponsor for Continuing Education Activities. This Professional Studies program is offered for a total of 0.3 PS CEUs at Some Content Knowledge Level.

More often than not, interpreters would sign medical terms with the assumption that the Deaf clients know what they mean. How many times have we interpreted “high blood pressure,” without creating an anatomy visualization for the client? What does high blood pressure really mean? In this workshop, we will go beyond signing word for word by elaborating and painting a picture for our clients to understand the meanings of simple and complex medical terminologies. We will focus on utilizing different Visual Vernacular aspects (facial expressions, classifiers, body movement, etc) and how to apply them. This workshop contains multiple hands-on activities and practices to allow registrants self-evaluate and gradually enhance their skills.

Participants will learn how to interpret medical terminologies in such a visual format for Deaf clients to comprehend. Participants will familiarize themselves with important aspects of Visual Vernacular and apply them in their medical interpreting. Participants will engage in hands on activities to improve and strengthen their visual intelligence

ASLIS virtual workshops are NOT recorded for later viewing.

Questions about our virtual workshops? Read our Frequently Asked Questions at – www.aslis.com/attend 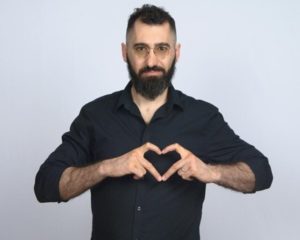 Daniel Israilov notices every single thing. His eyes capture the smallest details and he learns to imitate with his own art. This is where Visual Vernacular comes in, for him.

Born in Kazakhstan, then moved to Israel at the age of nine. At dinner tables, he’d impersonate family members, cracking up jokes, and telling stories. At twenty-four, there were more platforms to express his art, and he did just that on his social media. The storytelling led him to his wife, whom he married in New York City.

The city that watered his artistic seeds. As he learned American Sign Language (ASL), he learned what he has been doing all along, is called Visual Vernacular (VV). He continued to immerse himself in telling stories in VV and doing stand up comedy. He was rich in knowledge: knowing four languages and understanding several cultures – it was time for him to deliver.

A year later, he performed at colleges, non-profit organizations, and poetry clubs with his VV stories. He competed at ASL Elements with various talented VV artists. He taught ASL at Sign Language Center, teaching students how to navigate the language. With the modality of his fingers, his facial expressions and his body movements, he could tell endless stories.

This program is provided by ASLIS and is supported by grant funding from the Minnesota Department of Human Services, Deaf and Hard of Hearing Services Division.