ASLIS is an Approved RID CMP Sponsor for Continuing Education Activities. This Professional Studies program is offered for a total of 0.2 Professional Study CEUs at Some Content Knowledge Level.

This presentation is focused to interpreters and other professionals who work with non-signing deafblind consumers. While Protactile (PT) was created within the signing DB community, the philosophy and some of

This presentation is focused to interpreters and other professionals who work with non-signing deafblind consumers. While Protactile (PT) was created within the signing DB community, the philosophy and some of the tactile techniques can be very helpful to the non-signing community as well. It will also discuss other supports including using voiceover and other “re-voicing” techniques to help clarify the communication between the consumer and other service providers.

Participants will demonstrate understanding of: 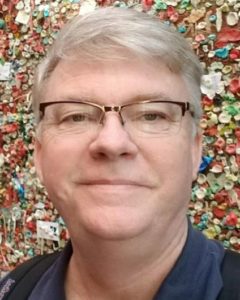 Paul Deeming has been interpreting since 1992 and certified RID CI since 1997. He has a Master’s degree in Deaf Education from the University of Oklahoma and Certification in DeafBlindness (Northern Illinois University, 1994). Paul was a member of the first Protactile Language cohort at the DeafBlind Interpreting Institute (DBII) at Western Oregon University in 2018. He specializes in the areas of deafblind, medical, and performing arts interpreting. He is a member of both RID and MRID and was honored with a Member of the Year award from MRID.

Paul began working with the DB community here in Minnesota in 1996 and has been very involved in both the Minnesota DeafBlind Association (honored with Volunteer and Member of the Year awards) and the American Association of the DeafBlind. He has also been an annual volunteer SSP at the Seabeck DeafBlind Retreat near Seattle, Washington for nearly 20 years.

In addition to interpreting, he has been a program manager at DeafBlind Services Minnesota (DBSM) since 2005.